It is time for a FIRST Wild Card Tour book review! If you wish to join the FIRST blog alliance, just click the button. We are a group of reviewers who tour Christian books. A Wild Card post includes a brief bio of the author and a full chapter from each book toured. The reason it is called a FIRST Wild Card Tour is that you never know if the book will be fiction, non~fiction, for young, or for old…or for somewhere in between! Enjoy your free peek into the book! You never know when I might play a wild card on you! 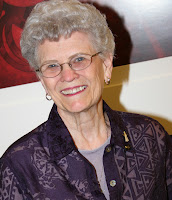 Martha Rogers’ novel Not on the Menu debuted on May 1, 2007, as a part of Sugar and Grits, a novella collection with DiAnn Mills, Janice Thompson, and Kathleen Y’Barbo. Her series Winds Across the Prairie debuted in 2010 with Becoming Lucy, Morning for Dove, Finding Becky, and Caroline’s Choice. Her other credits include stories in anthologies with Wayne Holmes, Karen Holmes, and Debra White Smith; several articles in Christian magazines; devotionals in six books of devotions; and eight Bible studies. Martha served as editor of a monthly newsletter for the writer’s organization Inspirational Writers Alive! for six years and is the state president. She is also the director for the annual Texas Christian Writer’s Conference and is a member of American Christian Fiction Writers, for whom she writes a weekly devotional. Martha and her husband are active members of First Baptist Church. Visit the author’s website.

Can runaway Libby Cantrell finally get a new start? Libby Cantrell’s life has gone from bad to worse since her mother’s death. After working in a brothel to support her abusive father, she sees no hope for her future until one cold winter night when she finds the courage to escape. When she collapses in Portersfield, Texas, exhausted, ill, and hungry, Sheriff Cory Muldoon finds her and takes her to the doctor. Against Cory’s better judgment, Seth and Erin Winston take her in and offer her a job as a nanny for their young son. As a minister, Seth sees it as his duty to take care of her. As a deputy, Cory needs to know the truth about her even as he is attracted to the waif of a young woman. As Cory’s feelings for her grow and winter becomes spring, will he be able to accept her as she is now and truly forget and forgive her sordid past? Product Details: List Price: $13.99 Paperback: 304 pages Publisher: Realms (May 15, 2012) Language: English ISBN-10: 1616386185 ISBN-13: 978-1616386184 AND NOW…THE FIRST CHAPTER:

Spring Hope is book four of the Seasons of the Heart series. I like how new people are introduced into the storyline and joined with the characters already there.  Spring Hope is a good read about a young women named Libby.

Libby had a good life growing up, until her mother died. Her father and her life changed after that. Libby, now a young adult, runs away from her fathers domineering ways. She has to learn to trust men and God again. Will Libby be able to put her past behind her and go on to have the life God has for her?